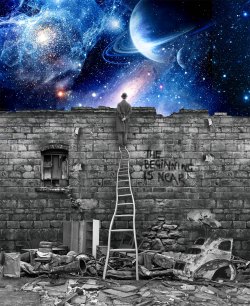 Yet another translation of this chapter reads;
With but a small understanding
One may follow The Way like a main road,
Fearing only to leave it;
Following a main road is easy,
Yet people delight in difficult paths.

When palaces are kept up
Fields are left to weeds
And granaries empty;
Wearing fine clothes,
Bearing sharp swords,
Glutting with food and drink,
Hoarding wealth and possessions –
These are the ways of theft,
And far from The Way.
(Translation by ZenGuide)

As citizens we cannot ‘blame the water for coming through the hole’. We need to first repair the hole.
Imagine a country that promoted the Tao Te Ching. The values and aims would cultivate a population very different from our reality.

Those in charge would ‘stay on the path’ and make better decisions. They would not take side paths leading to egotistic decision-making. Self-centered decisions made by governments puts their interests above those they swore to serve. When we stray from the central path of wisdom, our choices become dictated by personal karma rather than the path of greater good.

The very reason for government is the care and feeding of those governed. For those in charge to ignore their mandate in favour of feathering their own nests is an abuse of power. Such abuse may prosper for a time but it cannot be maintained, as it goes against the universal plan … the nature of the universe. See yourself as one who governs – not only others but also over your choices – and realise how chapter 53 applies to your life and your decision-making.

Indulging in extravagant excesses is not The Way, it is “the boasting of thieves.”
“The Great Path is simple and direct”, take the easy road. See the light. Don’t be distracted by the side roads, persistently offered in many guises.