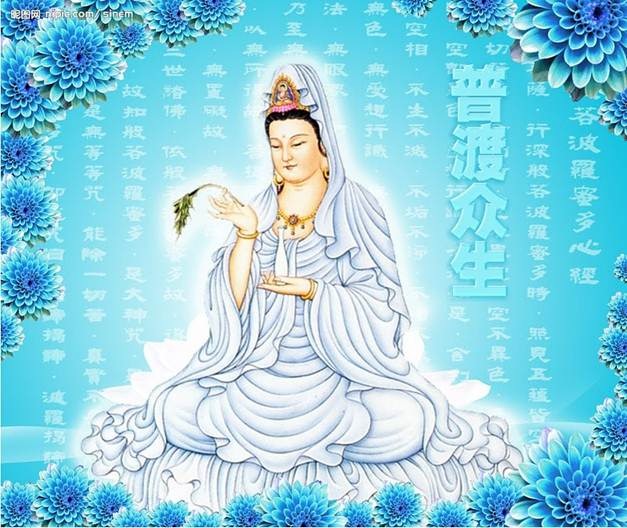 Always in white (colour of purity) Nan Hai Ku Fo – merciful, tender, compassionate, loving, protecting, caring, healing, kind, pure, and wise – is often depicted holding a vase and willow leaves. The willow leaves (a symbol of being able to bend or being flexible) represents our eyebrows, the vase (symbolising her pouring compassion on to the world) our nose, and the opening of the vase the divine third eye opened implies that that the Goddess of Mercy is watching over everyone. 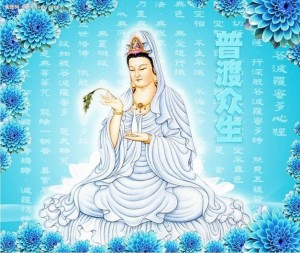 The story of Nan Hai Ku Fo goes as follows:
King Miao Chung (towards the end of the Chou Dynasty) in the Kingdom of Hsing Lin had three daughters – Miao Ching, Miao Yin and Miao Shan. The Queen, Po Ta, had a dream before the birth of the third daughter Princess Miao Shan. Po-Ta saw a heavenly pearl transforming into a fiery sun which then tumbled down and settled at her feet. The King in his wisdom considered the vision of such a heavenly sign to be a great omen, and he looked forward to having a son heir to his throne. When a girl was born he was very disappointed.

Miao Shan grew up to be a very religious and virtuous girl, unaffected by the attractions of the worldly matters, and very beautiful. She yearned to have a quiet retreat in the mountains where she could practise the perfections of her virtues and she longed to bring relief to all the miserable beings on earth.

When they were of marriageable age the King started to find suitable husbands for his daughters. Miao Shan steadfastly refused to marry and she left the palace to retire to a nunnery called The White Sparrow. Here she continued to practise her cultivation of Tao to achieve perfection. This angered her father.

King Miao Chung purposely made life difficult and unbearable for his daughter so as to persuade her to return to the palace. All his attempts failed, and in his deep anger he ordered the nunnery be burnt to the ground. Miraculously the fire was extiguished by an inundating shower of rain which saved the lives of Miao Shan and a few hundred nuns. The enraged King then decreed that Miao Shan be executed, but the executioner’s sword broke into pieces as it struck her neck. He next ordered Miao Shan be strangled to death with a silken cord. As she was being strangled the guardian god appeared in the form of a great tiger which dispersed the crowd, and carried her body into the forest.

On regaining consciousness, Amitabha Buddha appeared to her and directed that she continue her practice of the perfections in a cave called Hsuan Ai, on the island of Po-To, where after nine years of devotion in performing acts of merits and meditation Miao Shan attained Buddhahood… Nan Hai Ku Fo (Fo means Buddha) was conferred the Heavenly title Goddess of Mercy.

In the meantime, King Miao Chung was punished with an incurable disease. The only cure being an ointment made from the two hands and eyes of “someone who is never angry”. Having compassion for her father’s plight Miao Shan sacrificed both her eyes, digging them out with her fingers, and chopping off her two hands – all of which she had dispatched to him. The King recovery immediately and sent a delegation with his ministers to thank the kind donor.

On learning, to his great shock, that those precious gifts had came from none other than the daughter that he had ordered be killed, he was so overcome with remorse that he renounced his throne and accepted the Taoist faith.