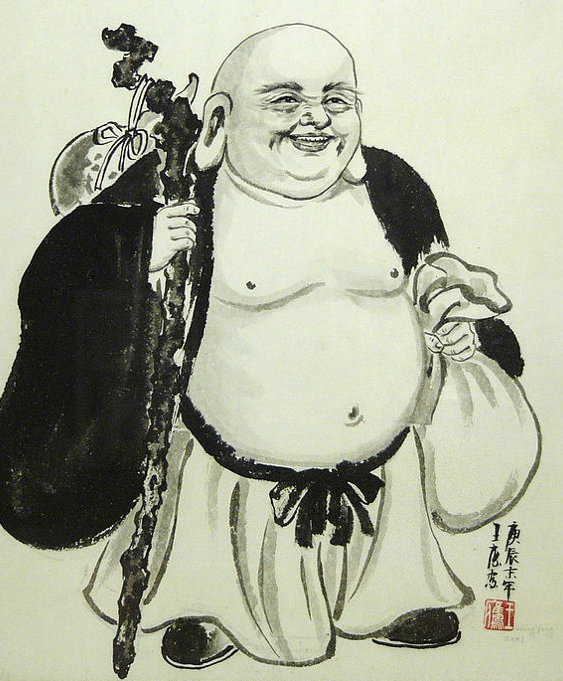 The monk called Maitreya (in Sanskrit) or Mi Le Fo ( 弥勒佛 ) – known as The Happy Buddha, The Lucky Buddha or The Laughing Buddha – is in fact not a Buddha at all, but a Bodhisattva. That is he was a companion of the Buddha, whom the Buddha designated as the next Buddha … which is yet to happen.

“Mi Le” means kindness, and he is known and believed to bring happiness, hope, and brightness to mankind – and so petitioned by many people for wealth and good luck. His function is to bring Heaven to Earth.

According to Buddhist tradition, Maitreya is a Bodhisattva who will appear on Earth in the future, achieve complete enlightenment, and teach the pure dharma. According to scriptures, Maitreya will be a successor to the present Buddha, Gautama Buddha (also known as Sakyamuni Buddha). The prophecy of the arrival of Maitreya refers to a time in the future when the dharma will have been forgotten by most on the terrestrial world. – Wikipedia

His beaming smile represents his endless love to human beings all over the world, no matter whether they are male or female, old or young, religious or not. Knowing this, whoever sees his smile, will also smile.

His big & long ear lobes also represents his availability to humans. He is the best of listeners, and he will never get angry or upset with anyone no matter what the have to say to him, whether it is good nor not.

His big uncovered belly illustrates his endless kindness and warm heartedness to humans. His big belly can hold anything, no matter whether it is good nor not. He will forgive anyone and everyone. He is honest, and treats humans equally.

Although Maitreya is portrayed as fat and jolly, he is said to have been all skin and bones when he knew the Buddha. 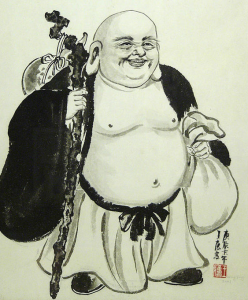 According to legend there was a monk who lived around the end of the Tang Dynasty (late ninth/early tenth century), who was a scholar and a wanderer. This monk always carried with him a hemp sack, which earned him the nickname “Pu-Tai,” or “Cloth Bag”. Despite being homeless and without possessions, he was always cheerful. He begged, taught, predicted weather, told fortunes and… like a Buddhist Father Christmas… distributed goods freely from his sack.

When he died he left a verse that lead people to believe that the cheerful Pu-Tai was in fact a manifestation of Maitreya Bodhisattva.
The verse read read:
Maitreya is a real Maitreya, who manifests uncountable transformed bodies.
Constantly he manifests before living beings who are not able to recognize them!

Happy Buddha’s look of prosperity, and custom of giving from his bag, brings about his attribute of Great Benevolence or Generosity.

Maitreya Bodhisattva is still portrayed today in the form of Pu-Tai.